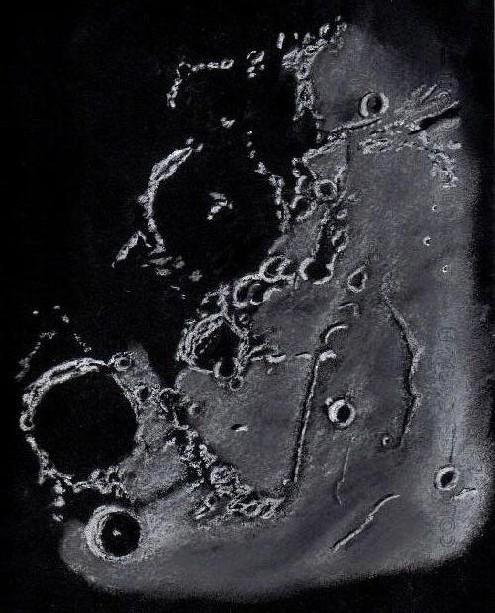 On this cold early morning I chose for sketching the lunar highland region that is pointed directly to Earth, namely the Great Peninsula and the adjacent Mare Nubium. It would be much fun to draw the entire visible part of the Peninsula in just one sketching session at the eyepiece but that is just a dream with the terminator features changing so quickly. I focused on just what I could handle inside my self-imposed two hour limit. The seeing was good and that alone means ignoring some visible detail within the allotted time.
I was well into the sketch when I noticed my first mistake. I was using the excellent black Canson acid-free paper and one edge was embossed with the words “Colorline Canson…” which I discovered about one hour into the sketch as I began drawing over these words… Dah.
The terminator was cutting across the western part of the peninsula which was diagonal and inverted in the eyepiece from upper right to lower left in the Newtonian telescope.
From top center to lower left the large ancient craters with floors in full darkness are: Regiomontanus (125km.) with an illuminated, cratered peak somewhat off center; Purbach (120km.) with its arching central peaks picking up the last rays of sunlight; Smaller Thebit (60km.) closest to Rupes Recta (Straight Wall); Arzachel (100km.) with all but the rim in total darkness (note: that was not the case before I started sketching); and lastly Alpetragius( 40km.) with the tip of its huge central peak catching light.
The two smallish and younger craters on the other side of Rupes Recta are Birt (17km.) and Nicollet (15km.). With such good seeing many smaller craters were clearly visible across the Sea of Clouds. While observing this region after finishing the sketch in twilight, clouds moved in and closed out any further viewing.
Sketching is always a series of compromises, if you want the moon high in the sky this time of year you are limited to the early morning. During the fall early morning is the coldest part of the day and you need to give up some sleep time.
It was an adrenalin rush to see the moon on this morning and enough to keep warm.

8 thoughts on “The Great Peninsula and Adjacent Sea”