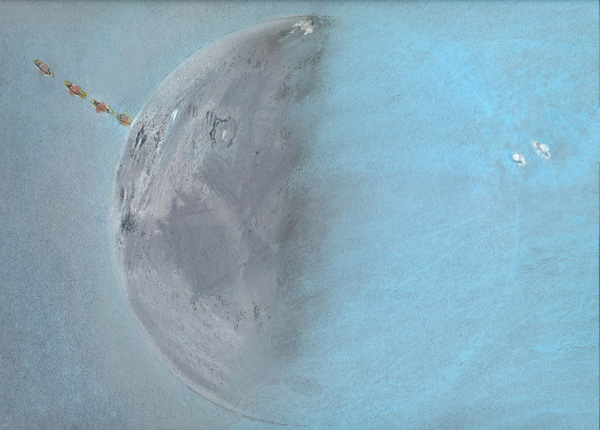 I was not expecting to catch a glimpse of Saturn in a daylight sky, no way was I ready for that amazing vision. In my first look there was the white ringed planet right in front of me, in a blue blue sky heading into the invisible limb of the moon.

I just had to try to capture it, in some way, so I drew it quickly on black paper and then watched and waited until she began to vanish into nothing!!

I set up my easel and I began to sketch the moon through wispy cloud while I waited for Saturn to emerge from behind the lunar sphere. As she reappeared one hour or so later there was a wonderful change in her color against the darker sky. She was so tangerine, she was so beautiful. Saturn and her invisible icy orbs appeared to be flying along as our moon moved and glided out of her majestic way.

3 thoughts on “Lady Luna meets the Lord of the Rings”