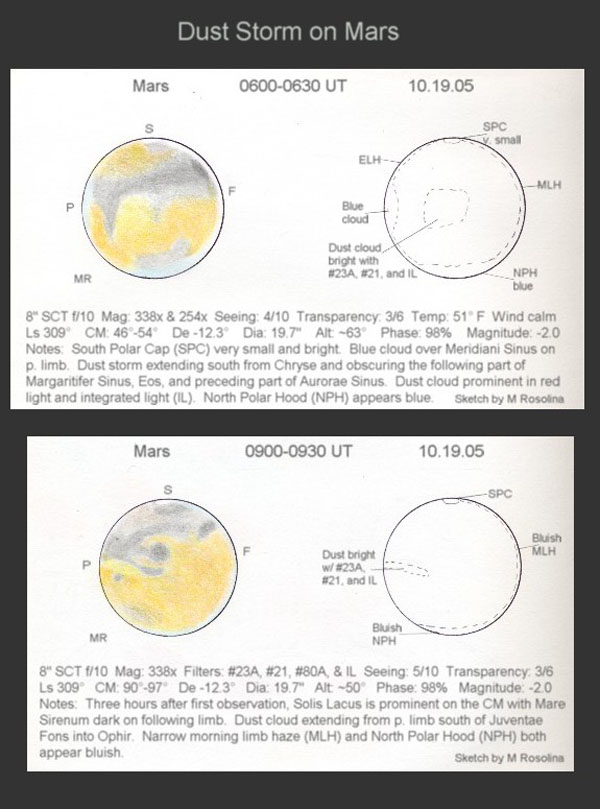 With Mars rising in the early morning hours and slowly increasing in apparent
diameter, Mars observers are already gearing up for this apparition, even though
opposition and closest approach are still six months away.

Along with the opportunity to see the bright Martian South Polar Cap, the North
Polar Hood (the clouds surrounding and hiding the North Polar Cap), famous albedo
features like Syrtis Major, atmospheric clouds, and the giant shield volcano Olympus
Mons (the mightiest volcano in the solar system), observers always have the
potential to see a dust storm develop on Mars.

Although dust storms on Mars can become giant planet-encircling storms that obscure
the surface and cut short the observing season (as happened in 2001), they can also
remain regional, expanding rapidly to cover an area the size of the continental US
and then subsiding.  At least two regional events occurred during the 2005
apparition.

The excellent set  of Mars sketches by Jeremy Perez on ASOD (8 May 2007) prompted me
to look through my own logbook where I found these two observations made three days
before Jeremy’s drawings.  This storm had first been recorded by imagers on 18
October in the area known as Chryse, site of the first Viking landing.  By the time
of my first observation, the dust had spread south and was already obscuring
familiar dark albedo features.

In the second observation, Mars had rotated about 40 degrees of longitude, but the
dust had been travelling rapidly west, apparently flowing through the immense fault
(4500km/2800miles) known as Valles Marineris which is associated with the albedo
feature Coprates.  The dust later spread over Solis Lacus (the Eye of Mars) and on
towards the south polar region but never turned into a global storm.

This dust storm was bright in unfiltered light but observers wishing to track dust
closely need to use red filters–dust is bright in red light.  Wratten #23A and #21
filters are good for small apertures of 8″ (20cm) or less.  Those with larger
instruments can use the W25 filter.

The sketches were done using 2B, HB, and 4H graphite pencils, color pencils, and a
blending stump on Strathmore 70 lb. paper.  The circle templates are 2 inches.  I
like to include the line drawing diagram next to my sketch to label important
features without making the drawing too busy.

A dust storm developing on Mars is a fascinating natural phenomenon to see.  Good
luck with this apparition and Happy Mars Observing!

One thought on “Dust storms on a ruddy desert world”