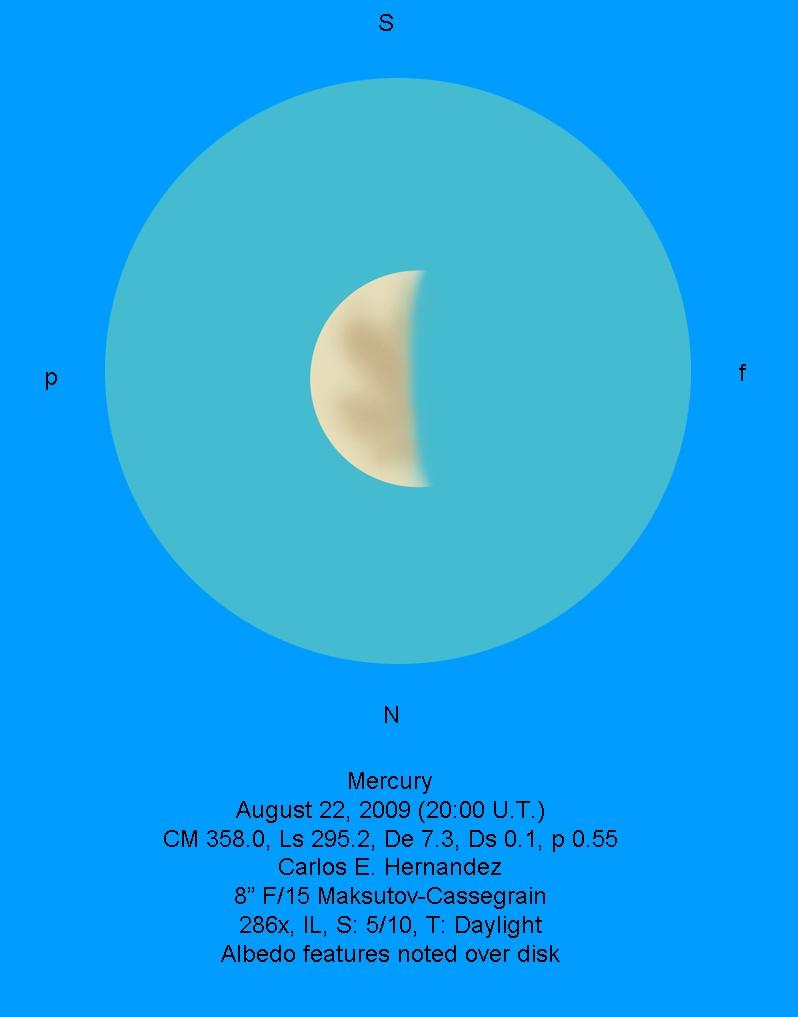 I was able to make a daytime observation of Mercury on August 22, 2009 (20:00 U.T.) using an 8-inch (20-cm) F/15 Maksutov-Cassegrain (286x). I was with a friend and suggested that we try hunting Mercury down in the daytime sky. There was a thin haze in the daytime sky so we thought that we may not be able to see it. We first centered his instrument (fitted with a solar filter) on the Sun then offset it by approximately two hours in right ascension (RA) and Mercury was in the field. Mercury was visible at a quarter phase (55%) and albedo features were noted over the illuminated disk.

My observation reminded me of the historic observations made by Antoniadi and Schiaparelli over the end of the nineteenth century and early twentieth century. These classic astronomers made their observations of Mercury in the daytime as observing this planet is difficult in a darkened sky as it is never more than 28 degrees from the Sun. Schiaparelli and Antoniadi erroneously believed that the rotation period of Mercury was 88 days (instead of 58.6 days) and therefore locked in with it’s revolution period. It was not until 1965 when the radio telescope discovered the true rotation period.

BE CAREFUL TO NEVER OBSERVE MERCURY IN THE DAYTIME UNLESS YOUR INSTRUMENT HAS A SOLAR FILTER PLACED UPON IT UNTIL THE PLANET IS IN THE FIELD OF VIEW!

2 thoughts on “Mercury in Broad Daylight”