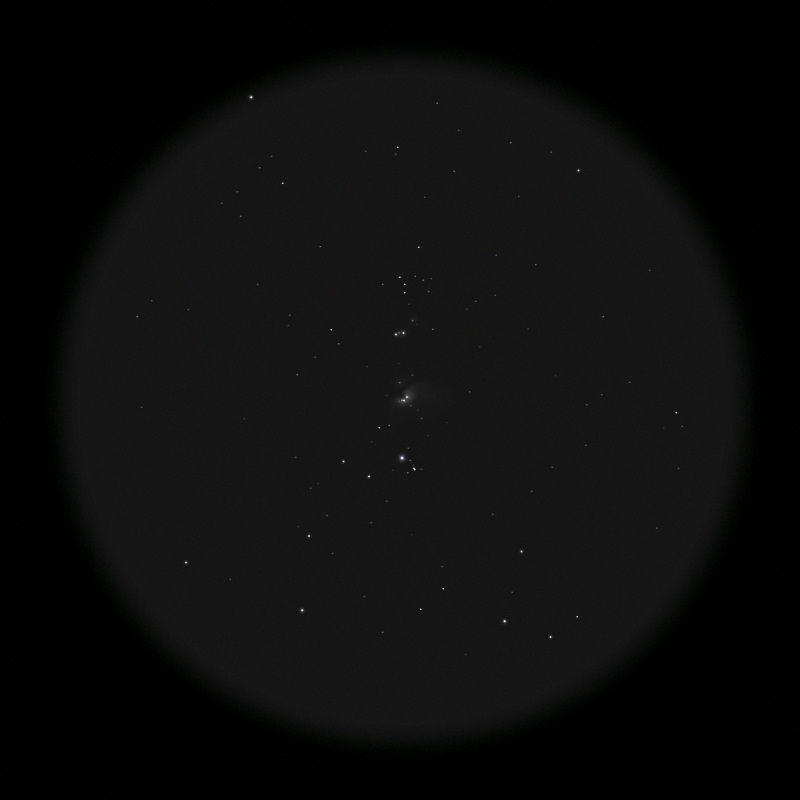 Some 5000 to 6000 years ago, one of the most ancient civilisations, Sumer, was based in southern Iraq. The Sumerians invented their own written language. Many Sumerian texts have been found on clay tablets. The Sumerians also practiced astronomy and gave names to the constellations.
The constellation of the Hunter, Orion, was known to the Sumerians as Uru-anna or The Light of Heaven. It has been suggested that Orion is named from Uru-anna.

Uru-anna or Orion is indeed a bright constellation. Most of its stars belong to the Orion OB1 association. Such is the case with the ‘Sword’ of Orion, a part of the sky which can be seen with the naked eye as a line of four fuzzy stars hanging under the Belt of Orion.

This region of the Orion OB1 association is filled with very bright stars. Many of these stars are very young giants or supergiants. The brightest star of the scene is Iota. Just a few minutes S of Iota is the double star Struve 747. Its components are only 36” apart, but clearly split at 7x. Struve 747 may look a little elongated in the sketch, due to the lower resolution of the rendering. It appears to me that Iota could be the lucida of a little poor open cluster, of which Struve 747 is also a member. The showpiece of the scene is M42, the Orion nebula. My 8×56 binoculars reveal two stars in the middle of M42 : Theta 1 and Theta 2. The latter is accompanied by two fainter stars to the E. The heart of the Orion Nebula is extremely bright. It can be seen with direct vision, also from an urban location. With patience and averted vision, a larger part of the nebula can be witnessed. Several faint stars can be discovered in the fading glow too. The western part of the nebula is the largest and the most obvious ‘wing’ of M42. Its northern border seems to be sharply cut away. As if a dark nebula separates M42 from the fainter M43 a few minutes to the N. M43 looks like a faint star embedded in a misty glow. The dark nebula also curves S as if it wants to separate the Theta stars as well. The southern ‘wing’ is a very diffuse feature. It is the thick and long filament know from the photos, that point towards Iota. With averted vision, this filament can be seen with 8×56 binoculars.
At 30’ N of M42, the faint glow of the reflection nebula NGC 1977 shows up around 42 and 45 Orionis. A total of 3 stars can be seen within the nebula.
The final object is the loose open cluster NGC 1981, N of NGC 1977. My 8×56 binoculars show a total of about 10 medium to faint cluster members.
The above mentioned objects are all members of the OB1 association, at a distance of about 1600 l-y.

A second observation of this region with the 15×70 binoculars will be posted later.

(Note: if the sketch does look too dark on your monitor, try to darken the room.)

3 thoughts on “Treasures of Uru-anna”