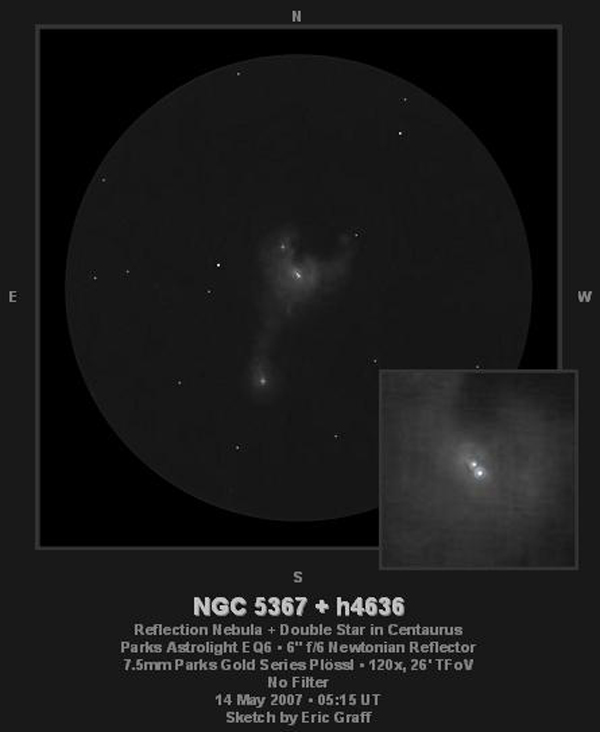 Located 2.2° north of 4th magnitude Phi (φ) Centauri, you’ll find what discoverer
John Herschel termed a “remarkable object”: a neat little double star shrouded in a
circular haze of nebulosity.  Described as “bright” in several references I was
expecting something a little more conspicuous in the eyepiece than this object
proved to be.

My first view of this object occurred atop a wind-blasted bluff at Sunset Crater
National Monument in Arizona on May 12, 2007 (UT), and was hampered not only by the
howling winds but poor transparency near the horizon that only became truly apparent
a few hours later when the rising Milky Way failed to reveal itself in its usual
splendor as the Sagittarius through Cygnus region rose in the east.  A second
observation took place two days later back home in California under somewhat
improved conditions (at least as far as horizon haze was concerned) and this sketch
was completed.

The initial appearance of NGC 5367 is that of a faint circular haze, about 3′ in
diameter surrounding a 10th magnitude star (which proves to be double at high
magnifications, and bears the designation h4636).  Its appearance (particularly on
May 12) was very much like the halo produced by a slightly dewed up eyepiece.  Two
field stars of similar magnitude did not exhibit this characteristic, however, thus
demonstrating that the haze surrounding the star was genuine nebulosity in the
depths of space and not condensation on my eyepiece.

With less certainty, averted vision sporadically hinted at more extensive structure
here, especially while slowly slewing the telescope back and forth in an east-west
motion.  Faint strands of nebulosity curving northward from the circular haze
partially delineate a dark cometary globule (designated CG 12).  This globule also
sends a dusky finger southward into the heart of the reflection nebula.  Additional
nebulosity (designated GN 13.54.9) was suspected around a 12th magnitude star about
6′ to the south-southeast and possibly a tenuous bridge between the two patches.

One thought on “Subtle Southern Splendor”