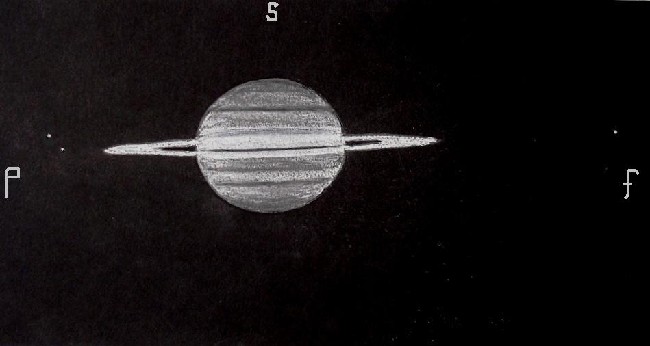 With the rings nearly edge on but opening just slightly, I felt it was time to record another sketch of the ringed giant. To begin the sketch I used a white Conte’ crayon and compass to draw a circle on black paper. I then used a mechanical drawing tool called a French curve to convert the circle into an ellipse after plotting a few points to create an equatorial bulge. When the shape looked alright for the bulging globe, I sketched the rings and then the globe while looking through a 4 mm orthoscopic eyepiece (magnification 362 x).

I observed Saturn for 40 minutes before beginning the sketch which took about 50 minutes to complete. I made note of the positions of the moons I could see and added Tethys (10.3) and Rhea (9.9) to the west of the planet and Dione (10.6) to the east. Titan was well beyond the planet to the west and Iapetus was visible above the planet to the south. Both of these moons were beyond the boundaries of the sketching area. The planets equatorial zone and the north and south temperate zones were bright and distinct. The darker regions over the remainder of the disk were less distinct through the polarizing filter I was using.
Although the transparency was only average at 3/5, the seeing however was exceptional at Pickering 8.5. The stars were rock steady for long intervals.

For this sketch I used: black Strathmore 400 Artagain paper, 6”x 16”, and white and black Conte’pastel pencils and Conte’ crayons. The globe of Saturn is about 2.5” inches in diameter. Brightness was slightly decreased (-3) and contrast increased (+3) after capturing the sketch using a digital camera.