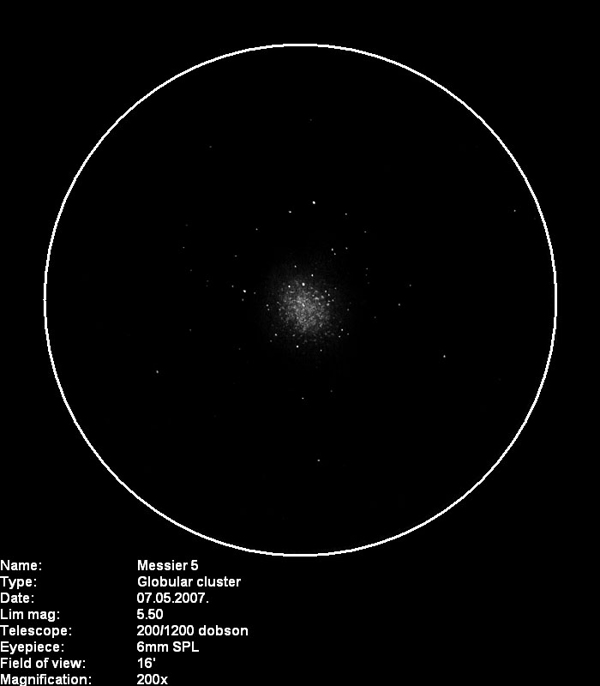 This sketch was created on plain A4 paper using graphite pencils and
fingers (for blurring). Later it was scanned and inverted in Photoshop
after some minor contrast and brightness adjustments.
I used 8″ F6 Dobson and 6mm Super Plossl Eyepiece. Magnification was
200x and field of view was 0.25°. Limiting magnitude was 5.50 and
transparency was very good.

M5 is beautiful globular cluster in Serpens. M5 was discovered by the
German astronomer Gottfried Kirch in 1702 when he was observing a comet.
Charles Messier found it in 1764 and thought it a nebula without any
stars associated with it. William Herschel resolved individual stars in
the cluster in 1791, counting roughly 200 of them.Spanning 165
light-years across, M5 is one of the larger globular clusters known. The
gravitational sphere of influence of M5, (ie. the volume of space where
stars would be gravitationally bound to the cluster and not ripped away
from it by the Milky Way’s gravitational pull), has a radius of some 200
light-years.

At 13 billion years old it is also one of the older globulars associated
with the Milky Way Galaxy. The distance of M5 is about 24,500
light-years away from Earth and the cluster contains more than 100,000
stars up to perhaps 500,000 according to some estimates.

One thought on “Sphere of influence”