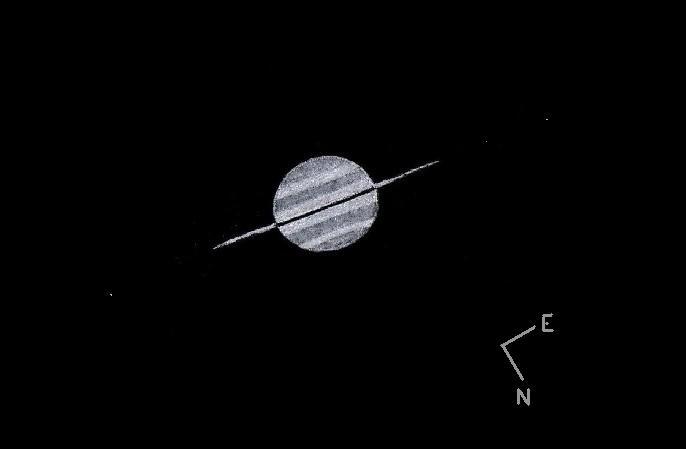 While I was awaiting the waning gibbous moon to reach a higher position in my southern sky, I decided to try my hand at a Saturn sketch. With the rings nearly edge on I find that the ring system is much less intimidating to portray. To begin the sketch I used a Conte’ crayon and circular compass to draw a faint circle on black paper. I then grabbed an old mechanical drawing tool called a French curve to convert the circle into an ellipse after plotting a few points to create an equatorial bulge. When the shape looked alright for the bulging globe, I sketched the rings and then the globe while looking through a 6 mm eyepiece (magnification 241x). Saturn usually give me trouble while sketching, so after 15 minutes I found myself making too many errors so I erased the sketch and started over on the reverse side of the paper. The second attempt went better and after an hour I considered the planet sketch finished. I made a note of the positions of the moons I could see and added Tethys (10.3) to the west of the planet and Enceladus (11.9) viewed intermittently and Dione (10.5) to the east. Titan and Rhea were visible in the eyepiece at low power but beyond the margins of the sketch. The planets equatorial zone and the north and south temperate zones were bright and distinct. The darker regions over the remainder of the disk were less distinct through the polarizing filter I was using.

For this sketch I used: black Strathmore 400 Artagain paper, 7”x 9”, and a white Conte’pastel pencil and Conte’ crayons. The globe of Saturn is about 2.5” inches in diameter and was done using sharpened pieces of Conte’ crayon. Brightness was slightly decreased (-3) and contrast increased (+3) after scanning using Microsoft Office Picture Manager.