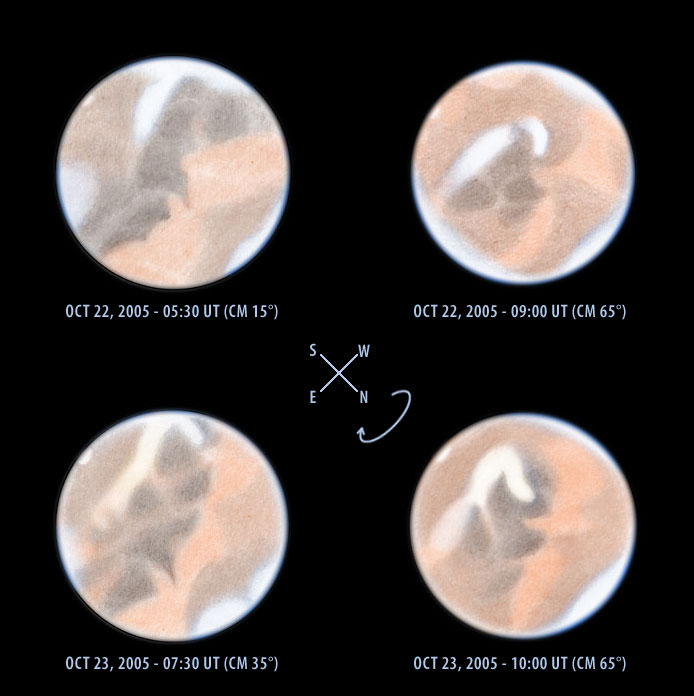 In late October during the 2005 Martian apparition, a dust storm
began to roar across the planet’s southern hemisphere. Over the
course of two nights, I was able to make four sketches of the storm
as it developed and rotated into view.

In the sketches, the dust storm can be seen wrapping out of the Solis
Lacus region. On the first evening, I was not able to detect any
color in the storm, but on the second evening, I thought I could
discern a very subtle, yellowish tint. I supplemented the
observations with 21A Orange and 80A Blue filters while using a 6″ f/
8 Newtonian at 240X magnification.

The sketches were made with 2H and HB pencils on 28# bond within 2.5″
diameter circles. For each sketch, I began by completely shading one
circle very lightly with a 2H pencil and then blending with a
blending stump. Then, using both unfiltered and 21A filtered views, I
shaded darker albedo regions with the HB pencil and blended again
with the blending stump. I described bright regions by using both art
gum and kneaded erasers to remove the base shading.

I made a second sketch of each view while using a 80A Blue filter.
This supplementary sketch consisted of a simple line drawing denoting
the brighter areas I saw.

After scanning the sketches and adjusting for contrast, I applied a
black background with a slightly blurred edge to approximate the soft
view through the eyepiece. By using additional layers in Adobe
Photoshop, I added color over the pencil drawing as described in my
notes. Where the 80A line drawing indicated bright spots, I added
some blue to the boundaries of those areas to show that they were
strong in blue light.

4 thoughts on “Veiling the Red Planet”