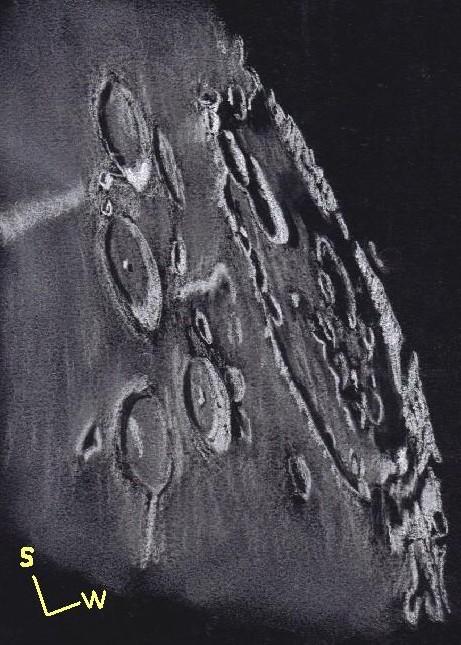 The terminator was approaching the southwestern limb of the moon as the basin Bailly, nicely visible due to favorable libration, came under full illumination. Bailly is large for a crater but small for a ringed basin at 300 kilometers in diameter. In the grazing sunlight the irregular basin floor with numerous craters was evident but no sign of the inner crater ring was visible as can be seen in overhead spacecraft images. The far side inner wall was beautifully illuminated in direct sunlight while features beyond were in total darkness. The depth of this basin is about 6 kilometer below the rim. The two large bright rimmed craters at the south end of Bailly’s floor are first older Bailly B at 65 km. and then younger Bailly A at 38 km. Also notable in this view is a portion of a bright ray of ejecta traceable back to Tycho (not in the drawing) and crossing crater Kircher (75 km.) before reaching the south end of Bailly. The 3 large craters below the Tycho ray are in descending size: Bettinus (73km.), Segner (70km.), and Zucchius (66 km.) which is the youngest of this group of craters.

This was the first evening the moon has been visible from my location since this lunation began. Although a little bit on the chilly side for sketching, it was a pleasure to get out and draw the moon again.

For this sketch I used: black Strathmore 400 Artagain paper 9”x 7”, white and black Conte’ pastel pencils and a blending stump. After scanning, Brightness was decreased (-2) using the scanner.