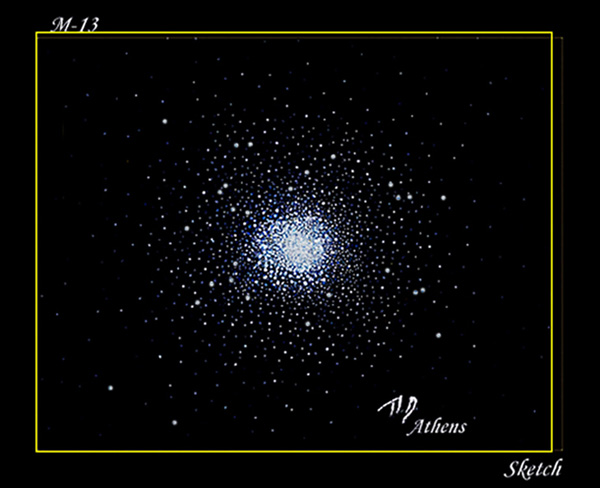 At the darkest part of a June night, you may spot a faint fuzzy patch way up high in
the south. Through binoculars, it appears as a gently glowing ball of light. With a
telescope, you can glimpse its true nature: a cluster of almost a million stars,
swarming together in space.

This wonderful object is known as M 13, because it was the thirteenth entry in the
catalogue of fuzzy objects recorded by the eighteenth-century French astronomer
Charles Messier. We now classify M 13 as a globular cluster. These great round balls of stars are among the oldest objects in our Galaxy, dating back to its birth some 13 billion years ago.

Sketch was made large on A4 black cartridge paper using white and colored pastels,
while viewing an astrophotograph…the sketch was then scanned and processed in Photoshop CS.

3 thoughts on “Waiting for a return call”