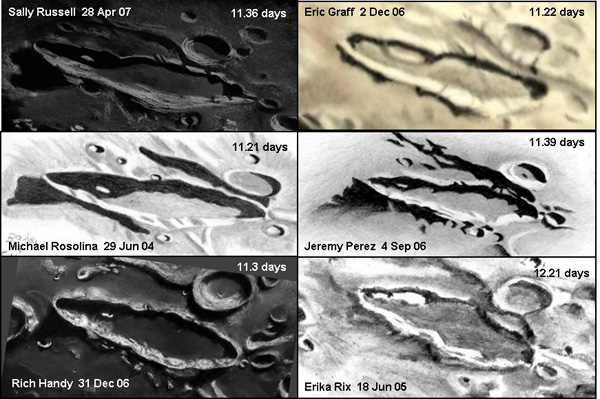 This composite image started out as a single white pastel on black paper
sketch posted on the ‘Cloudy Nights’ sketching forum. As the discussion
around it evolved, other Cloudy Nighters posted their own sketches of this
distinctive crater, and I began to construct the montage seen here in it’s
final form. It is fascinating to see the same lunar feature captured in so
many different styles and with different media. Between us we have covered
nearly three years of Schiller observations, each at around the same
lunation stage of 11-12 days when the local lighting is advantageous and
dramatic. The sketching media used varied between white pastel (or Conte’)
on black paper, and graphite pencil (or charcoal) on white paper.

(With the kind permission of Michael, Rich, Eric, Jeremy and Erika, and with
my thanks to them for generously sharing their sketches and making this
project possible.)

About 4.6 billion years ago, few million years after the formation of the proto Earth from the accretion of planetesimals in the nascent Solar nebula, our still molten world would suffer an impact from a another Mars sized protoplanet that would tear almost one fifth of the Earth’s crust and mantle away and scatter a debris cloud into Earth orbit. Soon thereafter this material would coalesce into the early Moon, the building of which would continue as major impacts accumulated over the next few billion years. Although at this time in our early Moon’s past much of the debris had already been swept clear of its orbital path, a close look at Luna herself would have revealed several stragglers, moons of our Moon in close tow. Jostled and buffeted by gravitational forces, these moons were either lost to space, impacted the early Earth, or were pulled inexorably until they plummeted to the lunar surface. Such impacts from degraded orbits share a common attribute, not only on the Moon, but on the other bodies of the Solar System as well. They all show an extremely shallow impact angle, usually in the range of 2 to 3 degrees to the surface. When such a moon strikes a body it will impart most of its kinetic energy longitudinally along its path, carving out a long elliptical shaped crater and sending ejecta laterally across the range. Working in tandem with these very oblique impacts are the tidal stresses that can break apart a small moon, thereby lengthening the “footprint” of the event by allowing space between successive strikes, much as seen in secondary crater chain formation.

Between 3.85 and 3.92 Billion years ago during the Nectarian epoch, one small gleaming moon was tugged and pulled, probably influenced by various mascons that had already developed in the gravitational field of the Moon. Falling out of orbit, it would follow a trajectory that would take it around the far side for the last time. As the little moon fell, tidal stresses split it into two or three large pieces, which traveled together as they continued their descent over the limb and around the southwest highlands, over the craters Gruemberger, Blancanus and finally Scheiner, where they impacted into the Zucchius-Schiller basin, creating the very oblong 174 km x 69 km crater, Schiller. Over the course of the next several hundred million years the flow of mare lavas would fill the basin and the floor of the long deep gouge, covering some the evidence of the violence of this event. So next time you are gazing at the Moon’s southwestern quadrant, stop by Schiller and remember when our Moon had moons.