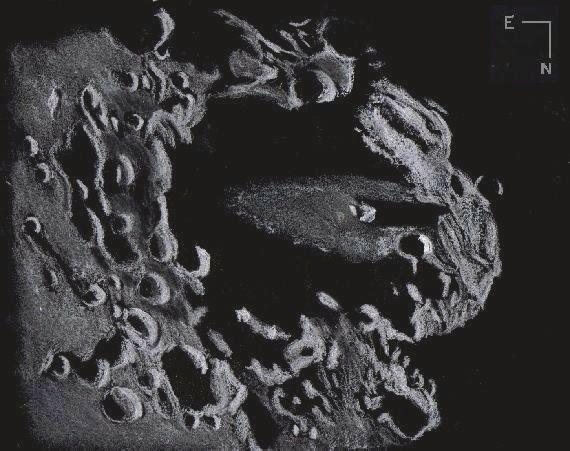 Over the past few weeks clear skies and good seeing have been absent at my usual observing site. Last evening all that changed at sundown with good clearing of the heavy cloud cover. As the moon moved eastward against the background stars and entered Capricornus, it was high enough in my sky for close examination and sketching. Among the craters of the southern highlands just at the terminator margin was walled plain crater Longomontanus (155 km. in diameter) basking in the early morning sunshine. This ancient impact is an old worn Nectarian period formation with a younger floor formed by liquefied eject from the formation of one of the distant large basins such as Orientale or Imbrium (see LPOD, December 30, 2007, C. Wood). Immediately east of Longomontanus I was able to see what remains of smaller older Longomontanus Z (95 km.). It is the darker shadowed depression that is only partly visible. The floor of this crater has small, mostly buried, central peaks which were casting long shadows on to the western inner crater wall. One of the three craters, Longomontanus L (16 km.) on the western floor stood out nicely in the grazing sunlight at the margin of the crater floor shadow to the north.