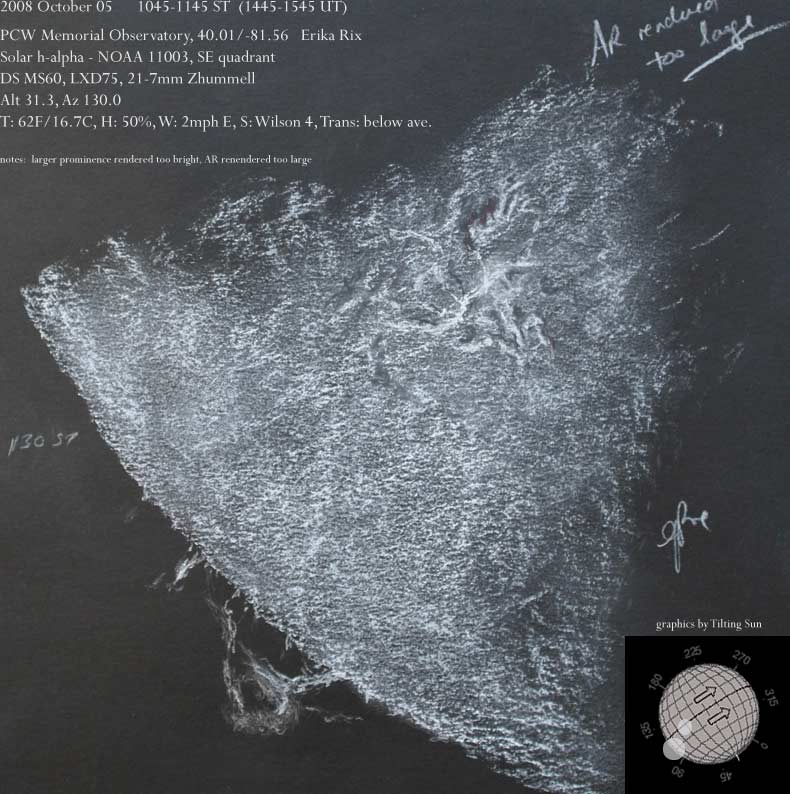 AR 11003 was not visible to me in white light using my ETX70 with a TV8mm plossl. I did see granulation on and off, transparency isn’t too great today. I almost thought I detected this region briefly, but couldn’t confirm it.

In h-alpha using my Maxscope, the area was lit up very nicely by bright slender plage making some of the background around it appear darker in comparison to the rest of the disk. I didn’t see any sunspots within the active region.

There were many prominences scattered around the limb and a very short, almost spot-like filament in the southern hemisphere west of the AR.
Sketch details:

This case is a perfect example of getting carried away with fitting in all the details and then losing touch on size and contrast. The active region was smaller in real life and a little further away from the limb. I continued on with the sketch anyway, marking the error in my report and off to the side of the sketch, since it was still an accurate representation of the AR within itself.

The prominence set on the limb is accurate in size, but I rendered it too bright, again getting carried away with my markings while trying to mark in the details within the prom.

Even though I’ve made the errors, I’ve marked them accordingly and still have a successful sketch from my observation. I say successful because I’ve still achieved my goals of in depth study of the Sun through sketching and managing to record my observations of these features regardless of two areas of errors that I stated. Sometimes sketching can be like patting your head and rubbing your belly at the same time. The results can make you giggle, but you still trying your hand at it.

I grabbed the black paper closest to me today, so that was the Artagain paper. White Conte’ chalk, Conte’ pencil, and white Prang pencil were for the white areas. Contrast added with a stick of charcoal and a black pen. No erasing was done and blending of the solar surface was done with my finger tips. No blending was done after that.

I added a -15 brightness after taking a photo of my sketch with my Rebel outside in diffused lighting. My new scanner is still giving me fits scanning in my sketches, so I find it easier to take photos of them until I can master the new machine. Taking a little more time out of my day than I should have for fun, I managed white light and h-alpha viewing.