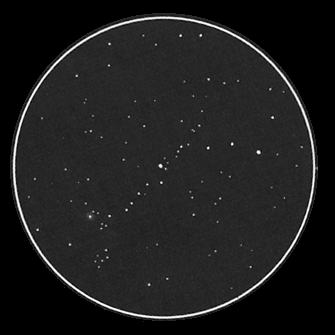 A fine line of stars. Five to 10th magnitude stars are lined up in a straight line over a distance of about 2.5°. As it is large, 10×42 binoculars are most suitable. It is visible in a 3cm finderscope but looks partly nebulous. It stretches from the southeast to the northwest. The southeastern end of this stretch splits into two. Maybe this is where the base of the water falls is. Near the eastern end there is a bright star. With a careful look the star looks smudged at the edge. It is the open cluster NGC 1502. Near the middle of the line of the stars is the brightest star (5th magnitude); other stars are mainly of 8th magnitude. More than 20 stars are seen as a whole.

One thought on “The Falls of Camelopardalis”