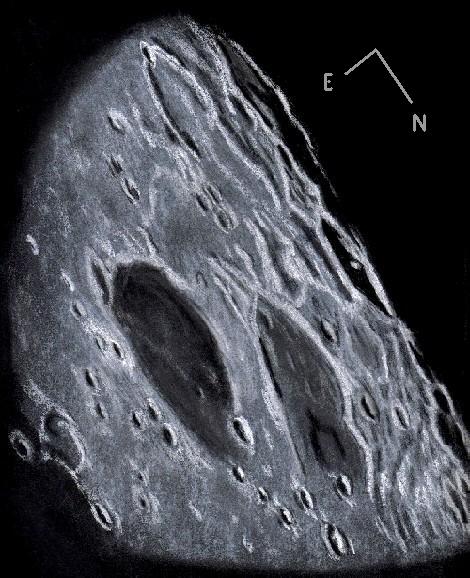 At one day before full moon the illumination along the western terminator, nearly at the limb was highlighting the Upper-Imbrium crater Schluter (92 km.) with its central peak protruding out from the darkness of the crater floor. The outer reaches of Mare Orientale in the name of the Cordillera mountains were just beyond the sunlight at the lunar limb. The largest feature in this sketch is the lava covered, very dark floored impact basin known as Grimaldi (230 km.) What we see of Grimaldi is the inner ring of a 440 kilometer, two ringed mini-basin. This Pre-Nectarian impact event was originally described as a walled plain crater of advanced age with a heavily worn and battered rim. The basin is noted for a large gravitation anomaly beneath the surface associated with a high mass density concentration. Adjacent to Grimaldi to the west is semi-dark floored walled plain crater Riccioli (150 km.) At the same age as its eastern partner it shows damage and age especially from the ejecta pitched out by the Mare Orientale event.