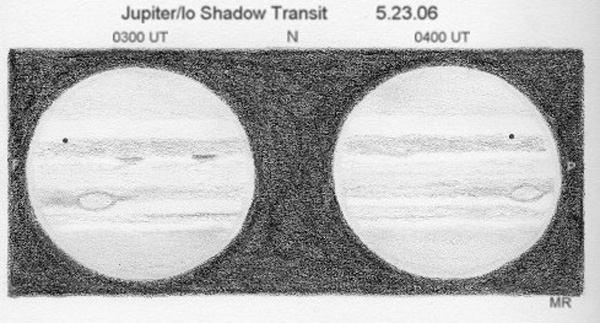 With its large apparent diameter, turbulent belts and zones, and Great Red Spot,
Jupiter is a fascinating object to observe.  This fascination goes up another notch
when one of the four Galilean moons makes a transit across the Jovian disk.

A transit occurs when the orbit of one of Jupiter’s moons takes it across the face
of the planet as seen from our vantage point here on Earth.  The moon itself can be
hard to detect, but the inky black shadow that it casts on the planet’s cloud tops
is easily seen with most telescopes.

In the hour of time recorded in the sketch, Jupiter is rotating from left
(following) to right (preceding).  Because the Great Red Spot happened to be visible
during the transit, the observer can get a sense of the incredible rotational speed
of this giant planet–one complete rotation about every ten hours!

The sketch was done at the eyepiece with 2B, HB, and 9B pencils on Strathmore 400
series 80 lb. paper.

One thought on “Shadow on the cloudtops”