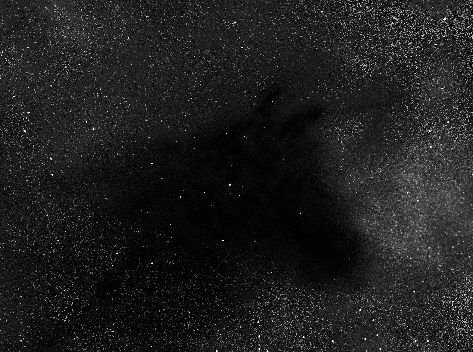 LDN 1795, a Dark Nebula
Sketch and Details by Dave Riddle

Located only two and one half degrees SE of the Galactic center, LDN 1795 may be one of the finest dark nebulae visible in small telescopes. Appearing as a prominent dark spot in my 11×80 finder, this dust cloud lies in front of the Great Sagittarius star cloud and exhibits an unusual shape as seen through my 18″ reflector at ~110x (20mm Nagler). I saw this inky cloud as either a horse’s head or the head of a Great Dane (making this cloud a kind of celestial Rorschach inkblot test!). John Herschel thought this field to be so extraordinary that he recorded two prominent “clusters” (now recognized as very dense Milky Way fields) in his Cape observation notebook. However, the concept of an obscuring cloud eluded him, although he would later admit that imperfectly transparent regions of space might exist. The idea of dark nebulae can be dated back to the mid-1700’s but it was clearly an idea ahead of its time. The digital drawing was done from a rude pencil sketch I made on the evening of July 21, 1998 from the dark rural skies of Panacea, Florida. As many of you know, drawing a dark nebula presents a challenge to the observer. Photoshop allows me to dispense with my pencil and eraser to make a finished drawing. With practice, I may get it right one of these days (nights)!

One thought on “A Celestial Rorschach Inkblot Test”