As this is the latest addition to my series of abstract astronomy-themed drawings (see more here: http://preshuss1.deviantart.com/gallery/45423007), I used a bit of artistic license in interpreting the lunar features that are shown. Still, I did my best to reference the moon’s actual geography.

The Sea of Rains is the central focus. Framing the craters Archimedes, Aristillus, Autolycus, and Cassini, this ancient volcanic plain is edged from south to north by the Appenine and Caucasus mountains, and capped by the “Alpine Valley.” The northern Mare Frigoris (Sea of Cold) bleeds around the crater Aristotle and into the lakes of Death and Dreams, finally bringing the eye to rest on a Sea of Serenity at lower right. Yes…it’s easy to get carried away by such tantalizing names! Exploring the lunar surface can feel like wandering through a poem…

Hello – I was recommended to your site by Patrick Wiggens of the Salt Lake Astronomical Society. I am a fine artist recently infatuated with the night sky and have spent the summer observing and making paintings from those observations.

Please let me know if this type of drawing does not apply to the intention of the site.

Bill Williams of the Salt Lake Astronomical Society helped me to discover Stargate as part of my training on the observatory’s 40cm Cassegrain. It has been a favorite ever since. I find it paradoxical that the precise geometric formation appears to be a flaw in the chaotic organization of the universe at this level. Perfection appears imperfect.
Best Regards,
Kristy Mitchell

Title: a moon crater
My name: Silvia Fabi
Object name: /
Object type: crater
Location: Ferrara
Date: 13/04/2013
Media: 2B pencil and black marker in white paper
Seeing: III
Description: this is a very small crater near Petavius. I searched the name on an app of my phone and on a book but I didn’t find nothing. Anyway I think it is a intresting crater to sketch.
Hope you like it!
Silvia

This crater was very nicely positioned along the terminator when I made this sketch. The main crater is Posidonius and the one just above (South) is Chacornac. The shadows and illumination formed an interesting connection between the two craters. It was very interesting to compare the details that I sketched to those of the very nice pastel sketch submitted by Frank McCabe on May 9th.

Though it’s not the time of the Holidays, I managed to sketch down this nice open cluster just before Christmas.
40x magnification showed the full cluster in my 80/400 refractor, which made me happy.

I hope you enjoyed it, too! 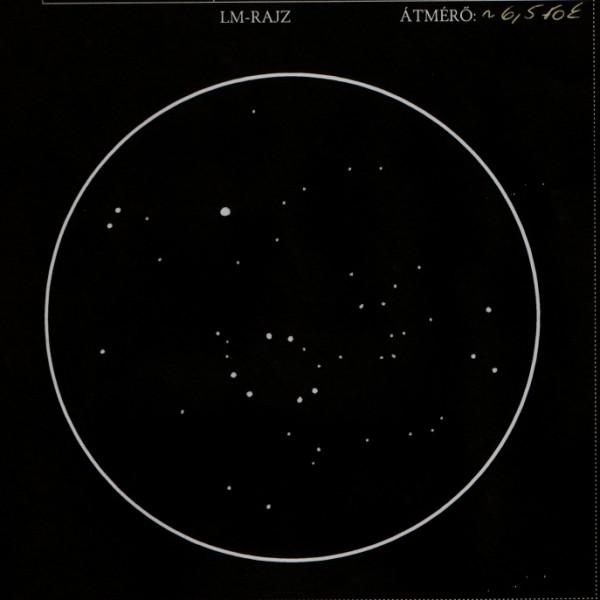 I would like to present my latest sketch of the Tóth 4 asterism in Taurus. 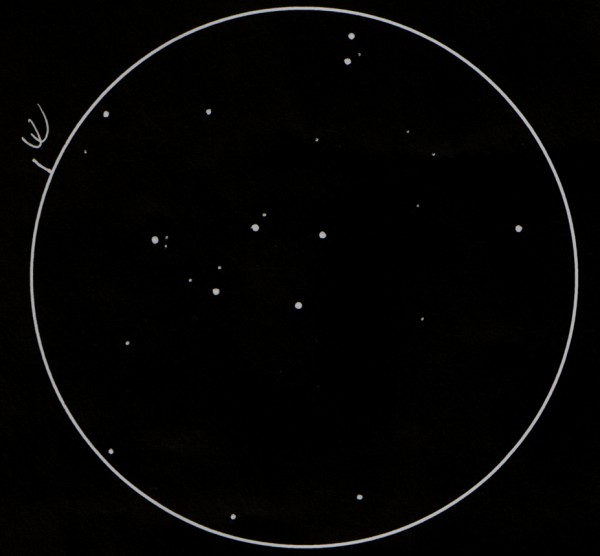 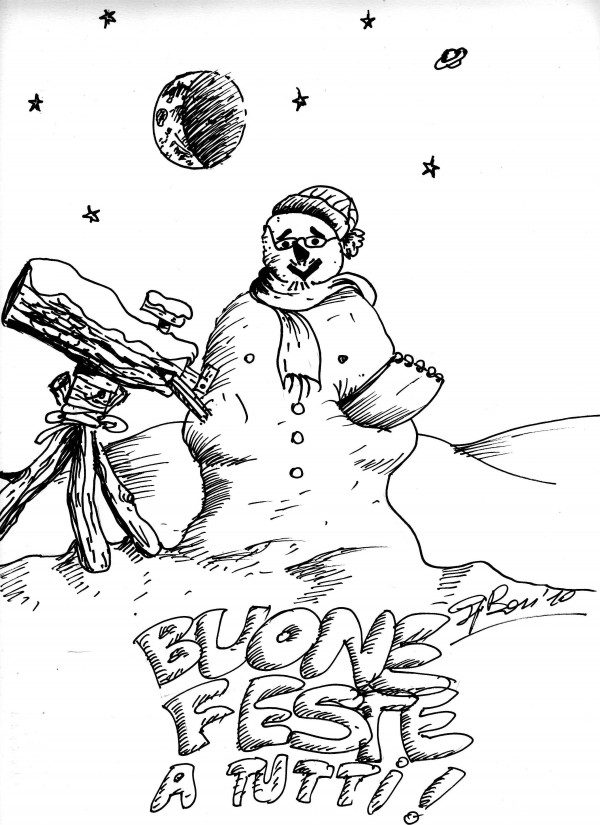 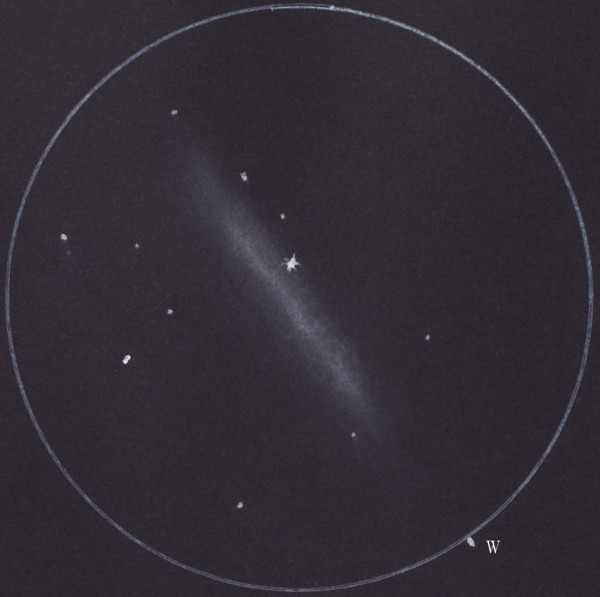 NGC 4517 is a really nice edge-on galaxy around 12′ x 2′ in size.
In the 41cm dob this galaxy looked very elegant and is designated as type Sc.
However visually it looks somewhat irregular in its appearance.

It reminds me of NGC 55 in Sculptor.
This is one of my older sketches from 2006. 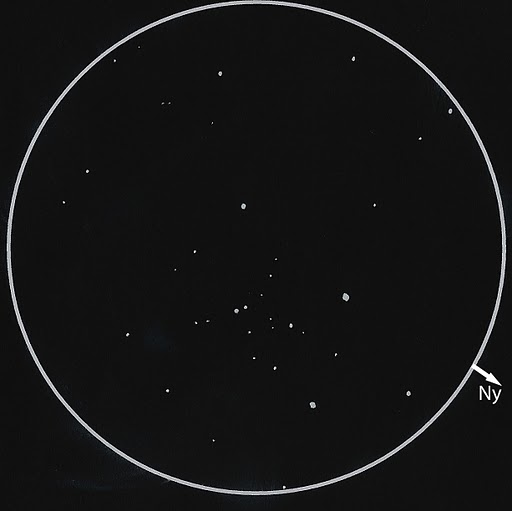 Object Name Messier 34 in constellation Perseus
Object Type Open Cluster
Location Tiszaújváros, Hungary
Date 30.10.2010
Media sketch: graphite pencil, final drawing: felt tip pen
My first open cluster-drawing with a felt tip pen.
I used a 80/400 achromatic refractor, with a magnification of 66x. The size of the field is 52′
This quite neglected cluster reminds me of the Owl-cluster, because of the two brigter stars at the cetre. 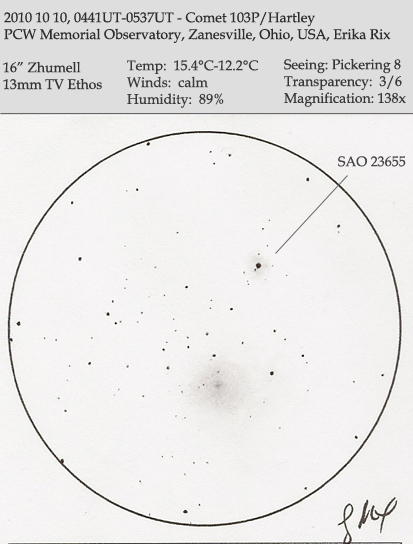 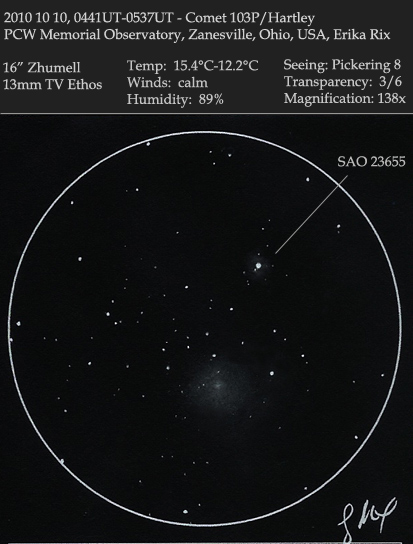 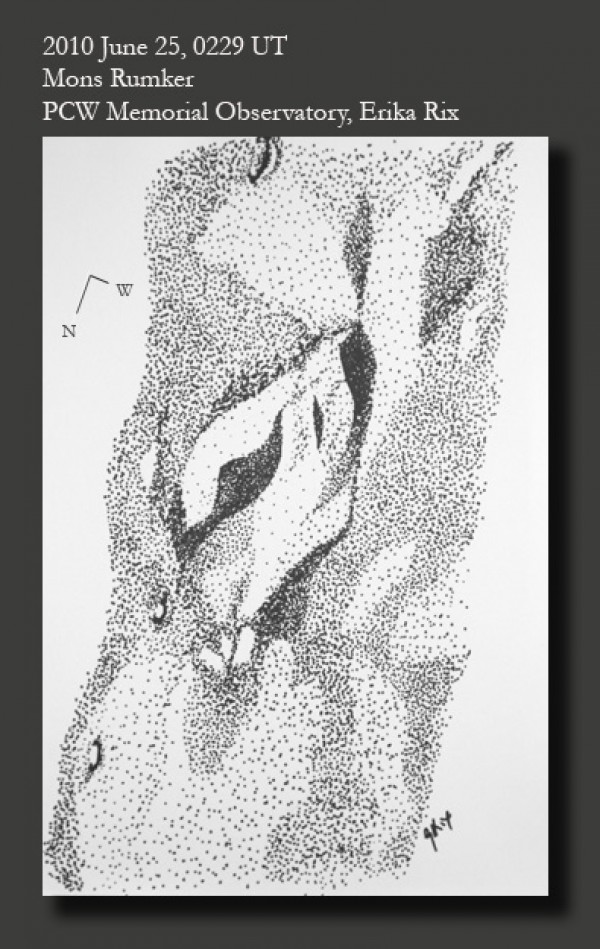 One of the joys of the types of observing sessions we do is trying new
techniques and media to sketch the objects we view (except for my solar
sketches….I’ve sort of settled for the comfortable ol’ shoe feeling of
my black paper and Conte’). I’ve played around with quills and India ink
for years, actually since I was in my early teens. The thought of having
an open bottle of India ink next to me in the dark while observing was a
not appealing. In fact, as messy as I am with ink, nothing within a 10’
radius would have been safe from being splattered black, including my
optics.

I’ve been studying some of Harold Hill’s beautiful sketches and fancied
trying my hand at stippling for lunar observations instead of my typical
charcoal or pastels. I believe the norm is to do a schematic sketch in
pencil and label it with a legend. The idea of this is to bring the
sketch back inside and stipple over it with the quill and ink in the
comfort of your home with light. If you took care with your notes and
the labeling, you could even do this days later. It takes me long enough
to write my reports and record all the data from my sessions and I don’t
relish the idea of spending extra time working on a sketch once my
session at the eyepiece is over. Above all, I certainly don’t trust my
ability to redraw (or draw over a schematic sketch) using a shading
legend, which is one reason my sketches are completed at the telescope.
I want to ensure that there is no chance of me messing up (adding
details, misplacing markings, wrong shadings…) the details that I
actually see during my session.

Taking all that into consideration, a good alternative to India ink is
using a marker. Grabbing what I could find on hand, I used white card
stock paper and a permanent marker with a finer point for my sketch of
Mons Rumker. Since this was my first attempt, I went ahead and tried the
schematic sketch with labels first of Mons Rumker. I ended up with lines
and numbers all through the sketch so that soon I was unable to make
neither rhyme nor reason of the sketch itself.

Next, I tried drawing the dome with a pencil as if I were making a quick
regular sketch of it. Then I redrew it inside the house using the marker
for stippling. Although it was kind of fun, if I’m going to do a sketch
with a pencil anyway, what’s the point of doing it all over again with
stippling? Plus, I accidentally inverted my craterlets in the re-sketch.
The final straw was when I showed the stippled sketch to Paul, my
husband who is also an amateur astronomer, and after studying it for a
moment, he asked me what it was. 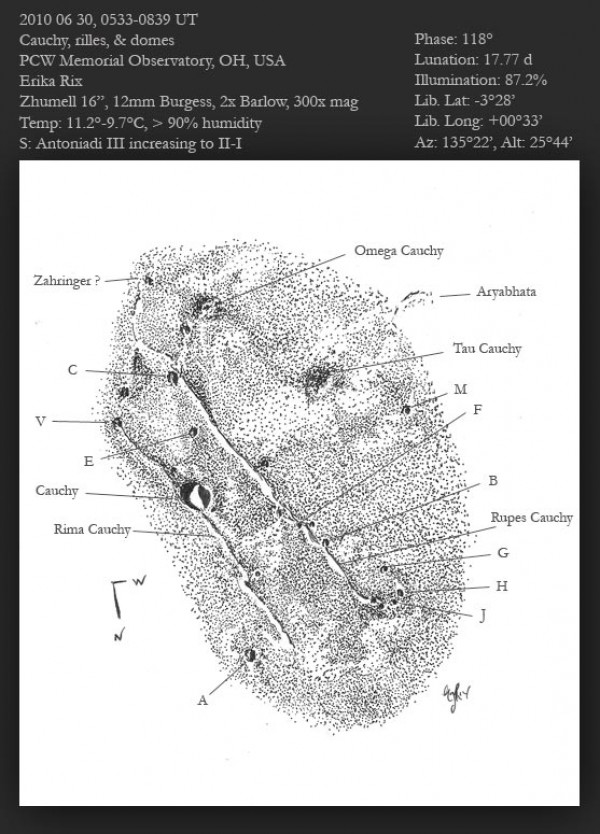 My next attempt turned out much better. I can’t help but to think part
of that is because I sketched while viewing instead of having to try
decipher my notes or markings of a schematic sketch after my observing
session was over. I was sketching all the subtle blendings instead of
having lined borders where the contrasts changed. Of course, the change
in markers plus a little more experience helped too. I sketched the area
around Cauchy with the rilles and domes nearby. I used an ultra-fine
black permanent marker with Rite in the Rain paper and created the
entire sketch at the eyepiece. I didn’t find a need to use erasers nor
pencils for the Cauchy sketch.

Harold Hill is a master and I’ve got a lot of work ahead of me. But the
first step is actually do it. The second is doing it again and again.
Throw in a few tweaks to the media or techniques, and my stippled
sketches are bound to show a result of my efforts. 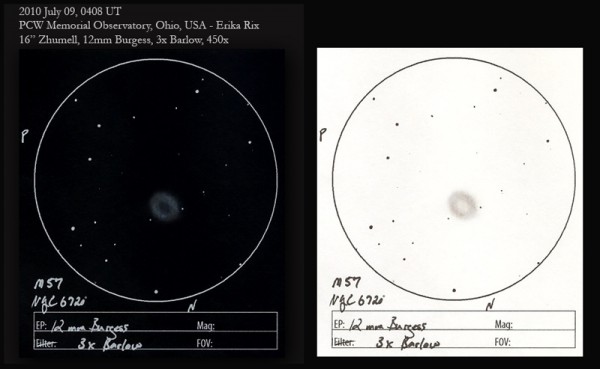 M57 never fails to please, just like other objects such as the Double
Cluster, M13 and M27. This is the first time I’ve used the 16” on this
planetary nebula and took advantage of the aperture to increase
magnification. I was particularly interested in looking for structure
within the ring as well as a richer star field. It most likely wasn’t
the optimal magnification to use, but seeing was rock steady and I was
itching to give it a try.

This object resembled a scrunched up American football, not quite as
oblong, but most certainly not completely round. The two ends were
fainter than the middle portions of the ring, which had strands of
brightened areas to the NW and SE sections of the ring. There was one
particular area to the northern area of the ring that could have passed
for a star, but not defined. It was more or less just a bright spot
within the ring. The center of the nebula was a hazy darker gray, also
appearing oblong. I couldn’t detect the ever-elusive central star. 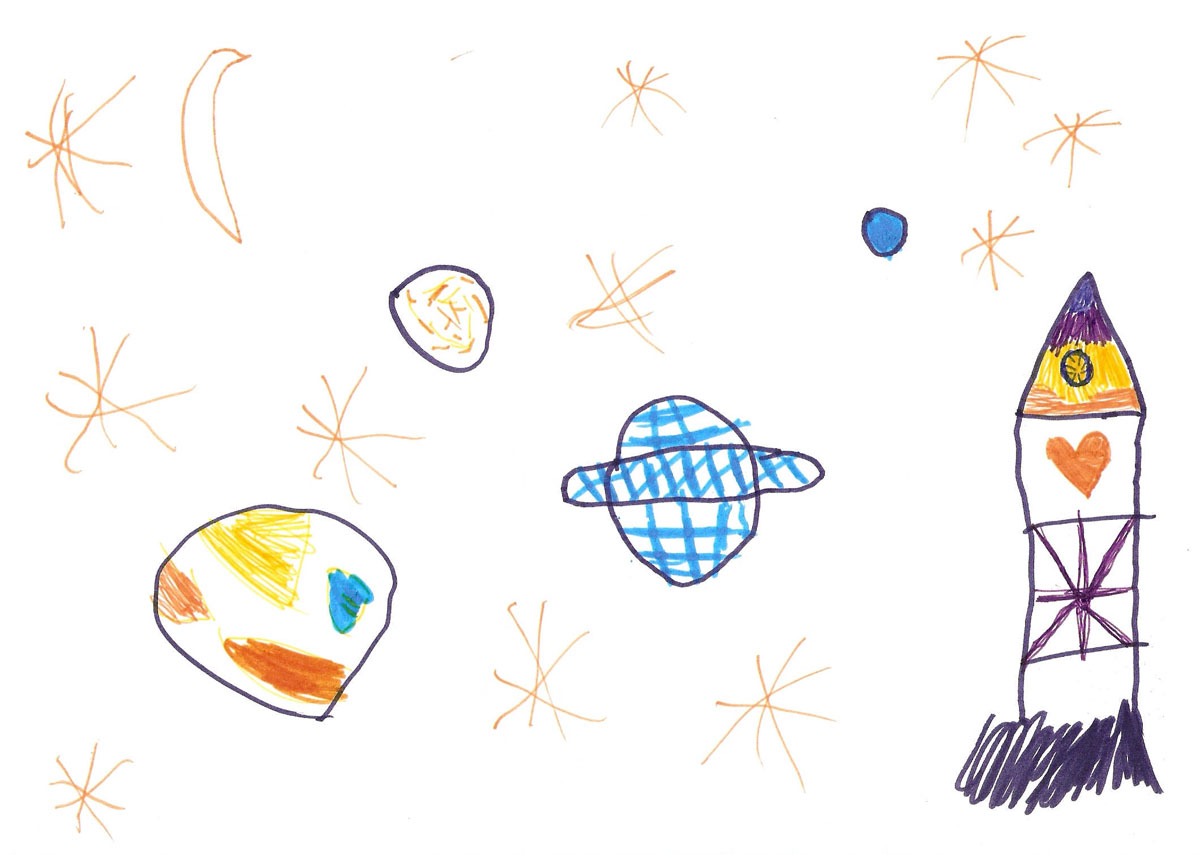 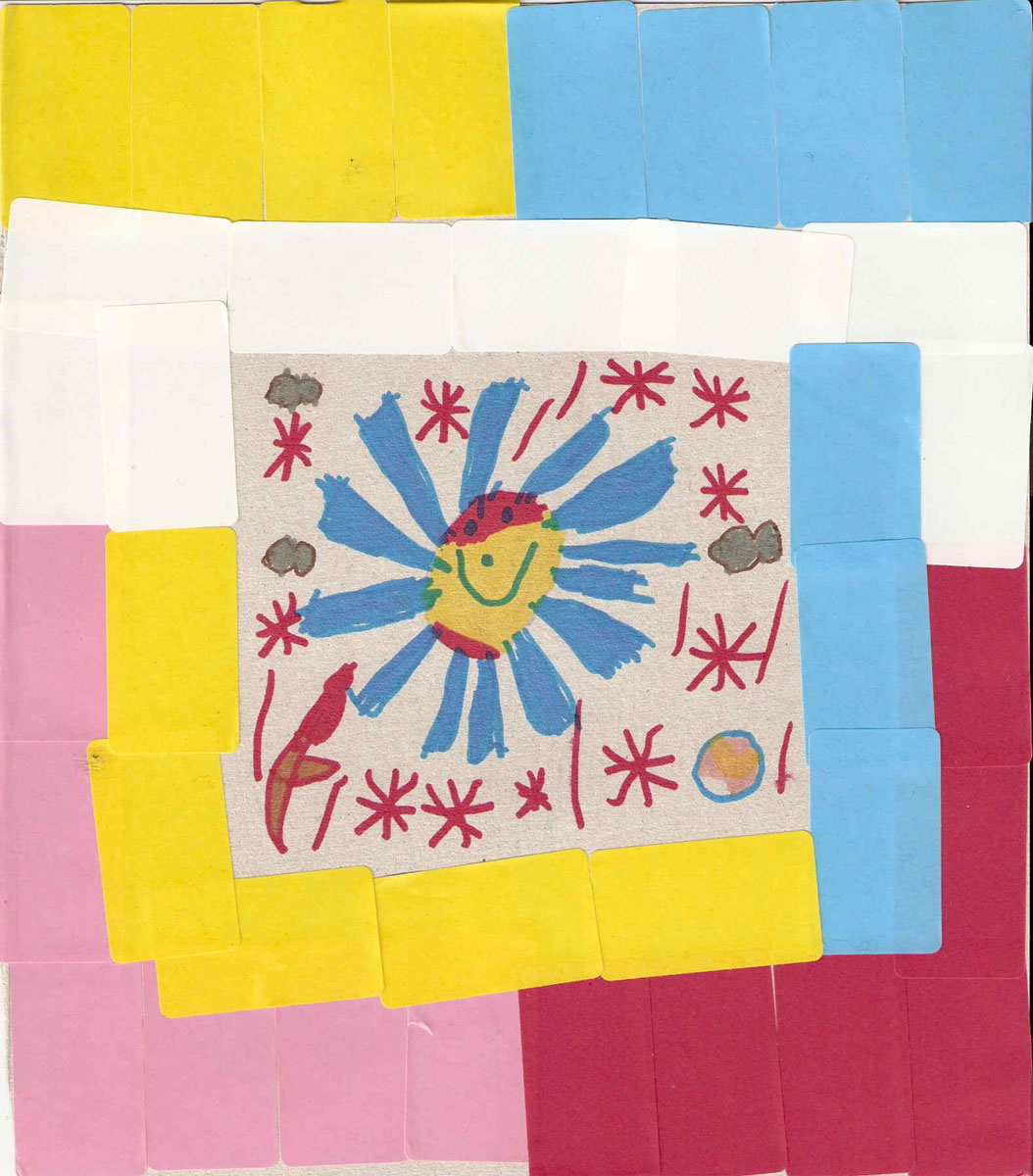 Inspired by the hobby of their father, Nine (4) and Luna (7) made two astrosketches. The youngest took the artistic freedom to unite the Sun with the nightsky. It doesn’t surprise me that the oldest put the Moon on her drawing, after all she was named after this celestical object. Hope you like it! 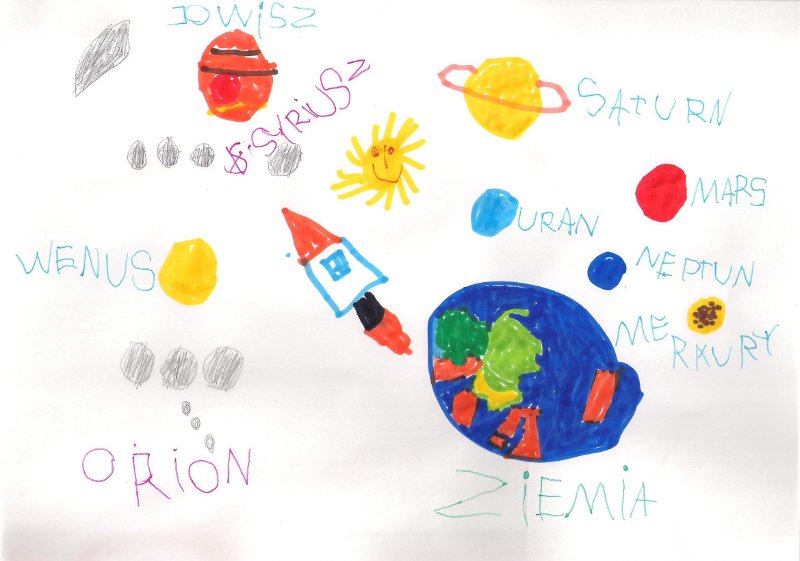