Hi ASOD. I’m from Lincoln, Buenos Aires, Argentina. This is a sketch made in “El Triunfo”, Argentina. See this types of object are important opportunities for see different object than usually. I’m very lucky for have seen this Nova.

I hope you enjoy the sketch. Regards & Good Luck!

Hello friends,
I send you a a quick drawing of Nova Sagitarii taken this morning, March 31, 2015
The sky was clear but the nova was very low on the horizon, with binoculars it looked splendid and bright.
Although very easy to locate from Nunki naked eye vision was difficult due to its low height.

As with some novae I have followed in the past I have been fascinated by the colours displayed as they develop. In particular one in Vulpecula (1960/70s) came to display an intense mauve/magenta hue (pink to some). If I recall right this was ascribed as it going through the “nebular phase”. More recently one in either Cygnus or Cassiopeia became the most intensely blue star I’ve ever seen!

Early Sep. it started to display hues that I struggled to name but opted for Bronze/Coppery-Yellows.

Then it reddened markedly and even so could not quite equate it to the redness of carbon stars V Aql or of X Sge which was more near the nova’s brightness then.

The last (Oct 5) observation showed a more definite difference to X Sge: it was now fainter than X but looked slightly more toward red-violet.

[Our thanks to David for allowing us to repost this from the CloudyNights.com sketching forum. –Jeremy]

I like things moving in the sky, and the Nova Del 2013 was the kind of progression that I like to chase.
A little bit less artistic, you can find the curve made of 30 magnitude estimations I did during 20 successive nights, no one single cloudy night!
The original sketch was done during the first night (Aug. 15th) the Dolphin constellation is easily visible.
The observation was made via 10×50 binoculars and then with a 80/400 refractor, received from my friend Yvan, to follow this observation . The sketch of the nova story, on the upper let corner, was made with inverted watercolour.
Hope you like, it’s difficult to make an artistic curve, isn’t it?
Michel Deconinck (from Polaris83 Forcalqueiret)

Amateur and professional astronomers around the world were galvanized by the recent news of the discovery by Koichi Itagaki of a nova in the constellation Delphinus. The star (actually a binary system) went from about 17th magnitude to a magnitude of 4.5 over a three day period, putting it in the ranks of the 30 brightest known novae.

I had to wait patiently for the clouds to thin enough for me to get this view of the “new star” with my 108mm reflector. A small planetary nebula, NGC 6905 (also known as the Blue Flash) was in the field of view winking in and out as the clouds thinned and thickened.

This observation was made as the nova was still increasing in brightness. By comparing the nova to two nearby stars, eta Sge (mag 5.0) and 29 Vul (mag 4.8), I was able to estimate its magnitude at about 4.9.

A nova occurs when a white dwarf draws enough fuel from its companion star to start an explosive runaway hydrogen-fusion reaction. The resulting cataclysm can be 50,000 times brighter than our Sun (or more)..

I made this drawing at the eyepiece on Canson Pure White drawing paper with 2B and HB pencils and a loaded blending stump. 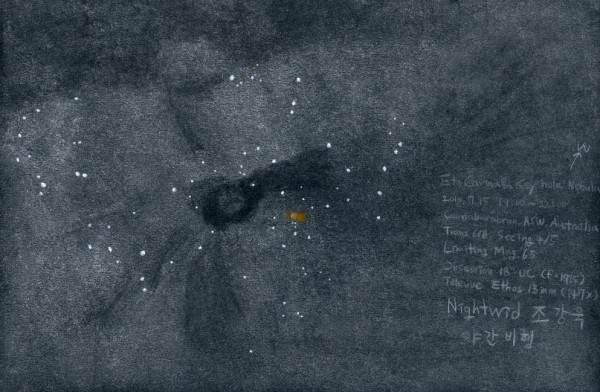 Last July, I went to Australia with obssesion 18″ UC to observing star.

(My hometown is S.Korea)

During my observation trip, lots of cloud covered with Australia.

So we rented a car, and moved everyday to find clear sky. (Goondiwindi, Miles, Coonabarabran)

It is not difficulty for observe erupted materials from Eta Carina star.

I did’n expect observing “Giant eruptions”, but I observed this feature with 18″ UC and extremly clear sky

(I saw belt of venus and zodiacal light every night) 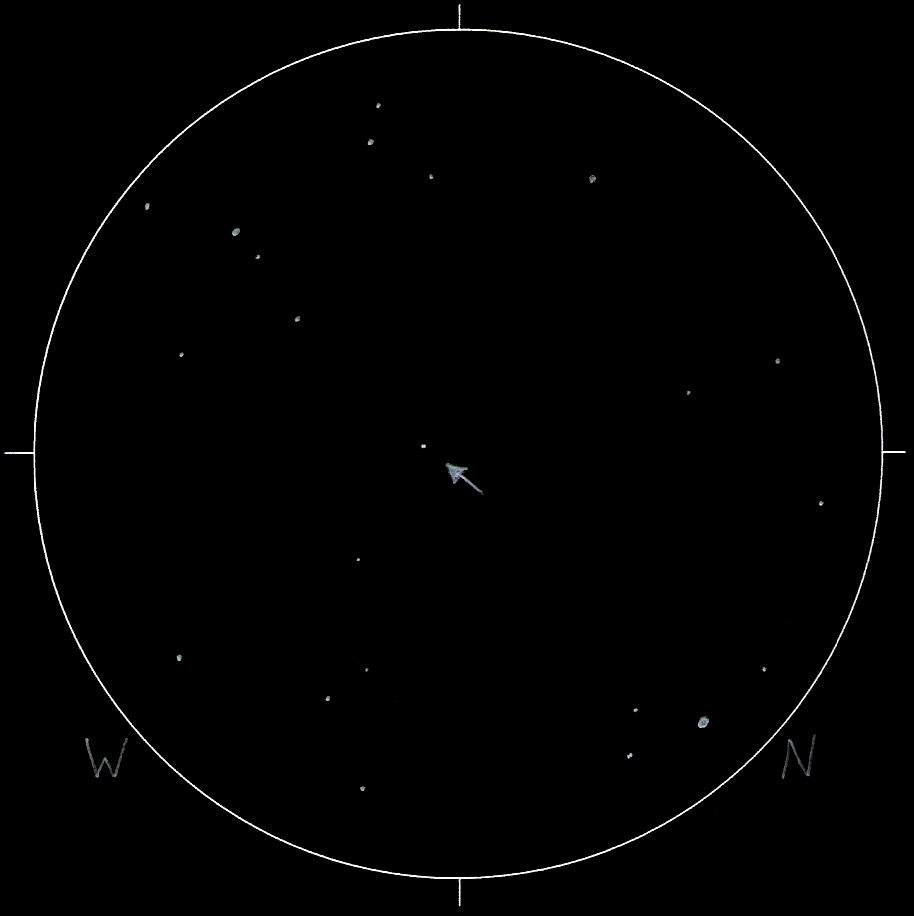 A nova is a cataclysmic nuclear explosion caused by the accretion of hydrogen onto the surface of a white dwarf star. Novae are not to be confused with supernovae or luminous red novae.

Astronomers estimate that the Milky Way experiences roughly 30 to 60 novae per year, with a likely rate of about 40. The number of novae discovered in the Milky Way each year is much lower, about 10.

An 8th-magnitude nova was discovered on November 25, 2009, by Koichi Itagaki of Yamagata, Japan. The new star lies in northeastern Eridanus, 6.9° west-southwest of Rigel. Prediscovery images suggests the star became as bright magnitude 5.6 in mid-November. Unfortunately, nobody noticed it then.

I had no trouble in finding the nova by using a finder chart from the American Association of Variable Star Observers. This chart contains comparison stars for magnitude determinations. My guess is a magnitude of 9.4.

Medium: graphite pencils HB/n°2 , printing paper, scanned and inverted, some cleaning up was made with Paint